From Far to Near: How 6 Hill Tribe Groups Made it to the Mountains of Thailand 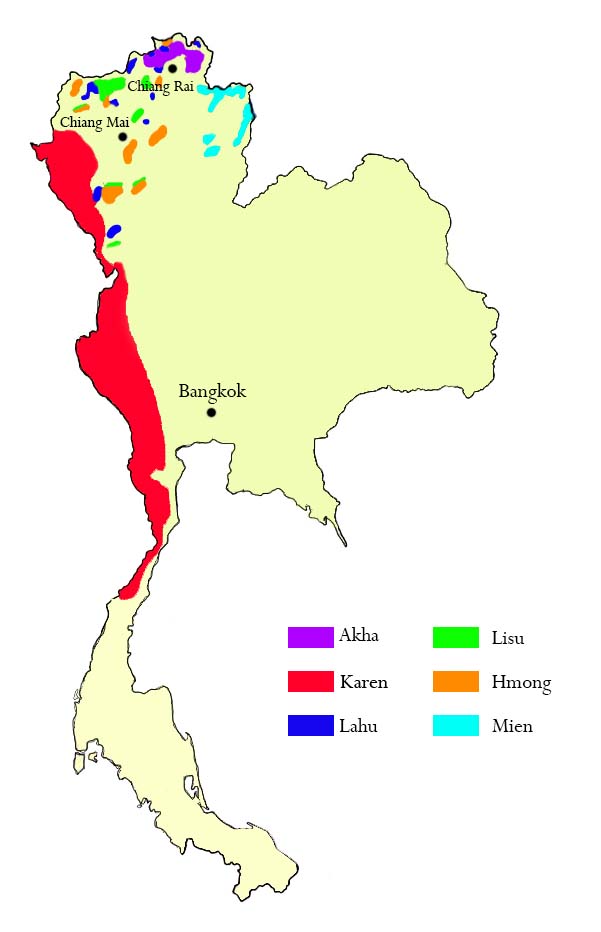 Have you ever wondered what it would be like to travel thousands of miles to an unknown land in order to escape persecution and hardship? To be permanently forced out of a country that you have called home for years? That was and is life for the hill tribe villagers of northern Thailand.

Today, the northern and western mountainous regions of Thailand is home to nearly one million hill tribe villagers. They have been inhabiting these mountains for hundreds of years, mostly originating from parts of China, Laos, Myanmar, Nepal, Tibet, and Vietnam.

There are over 40 different hill tribe groups currently living in Thailand. Six of those groups form over 90 percent of the total. It is quite a remarkable story as to how each of them came to be in Thailand.

The Akha are a people group originating from China. Although their Chinese origin is widely accepted, there is discrepancy as to what part of China they come from. Scholars believe that the Akha originated from China’s Yunnan Province, but Akha people themselves believe that their oldest ancestors began in Tibet.

The Akha speak Akha, which is a language in the Loloish (Yi) branch of the Tibeto-Burman family. They have no traditional written Language but the spoken language is closely related to Lisu, another hill tribe group. It is thought that the Akha once belonged to the Lolo hunter tribes people, who once ruled parts of Yunnan before the invasion of the Ming Dynasty in 1644.

Historical evidence show that the Akha were in Myanmar as early as the 1860s and first entered Thailand from Myanmar at the turn of the 20th century, during the decades long Burmese civil war.

Today, the Akha are one of the more prominent hill tribe groups, with nearly 70,000 documented people living in Thailand.

The Lahu people started out in the Yunnan province of China. They were one of four groups (the others being Hmong, Lao, and Mien) that were recruited by the United States Central Intelligence Agency (CIA) to help fight against the communist group, Pathet Lao. This was known as the Secret War, a result of the Laotian Civil War and Vietnam War. When Pathet Lao took over the Laotian government in 1975, many of the Lahu that were helping the United States fled to Thailand to escape retribution.

The Lahu are a very diverse people group and have multiple subgroups, consisting of the Black Lahu, Red Lahu, White Lahu, Yellow Lahu, and Lahu Shehleh. Each of those groups have their own subgroups as well.

Lahu are known for their notable hunting abilities. In Thai, they are referred to as “musser”, meaning hunter. There are about 100,000 Lahu villagers in Thailand.

The Mien are a subgroup of the Yao people group in China originating from South-West China. Although an old study, in 1995, according to the Tribal Research Institute of Chiang Mai, there was a recorded record of 40,000 Mien living in 173 villages in northern Thailand. Larger numbers are found in Laos (85,000) and Vietnam (474,000) with the majority still in China.

The Mien are believed to have begun migrating from China during the 15th-16th century and spread throughout northern Vietnam, northern Laos and northern Thailand. Much like the Lahu, the Mien migration into Thailand was greatly accelerated in 1975 after the Secret War, when the victorious Pathet Lao began seeking reprisal for the Mien involvement with the United States secret army. 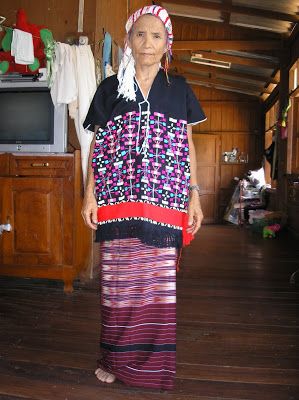 The Baw G’naw, known to many as the Karen, are one of the largest hill tribe groups in Southeast Asia.  They are spread throughout Myanmar, Thailand and Laos, and their population is estimated to range from 7 to 14 million people. In Thailand alone, there are around 400,000 Karen villagers, making it Thailand’s largest hill tribe population.

Although the Karen have been in Myanmar for centuries, their true origin is widely unknown.  According to the Karen legend, Taw Mei Pa, they can be traced all the way back to Mongolia. Taw Mei Pa was seen as the father of the Karen race. According to their story, Taw Mei Pa lead the Karen people away from their homes when the place they inhabited became the battlefield of an outside war. During their journey, he lead his people across a ‘River of Running Sand’ or ‘Hti Seh Meh Ywa’ which has been interpreted by scholars to mean the Gobi Desert.

The Lisu are the only people group on this list with ties to China as well as India.  They are believed to have originated from the mountainous regions of Tibet, but were forced to split, with most migrating to southern China, and the rest to north eastern India.  No one is sure whether this split was caused by war or if it was self inflicted due to tribal discrepancies.

Prior to the 18th century, the Hmong are believed to have had strong origins in the plains of the Yellow River region of China. This is an important area in Chinese culture because it is said to have been the birthplace of the ancient Chinese civilization. The Hmong thrived in this area, until the expansionist movement of the imperial Han led to thousands of Hmong massacred and displaced. Seeking refuge, the surviving Hmong took to the mountains for protection. They continued moving around in the mountains until the threat from the Han became too great. It is then that they began migrating into the northern regions of Southeast Asia, with the highest populations concentrating in Laos. 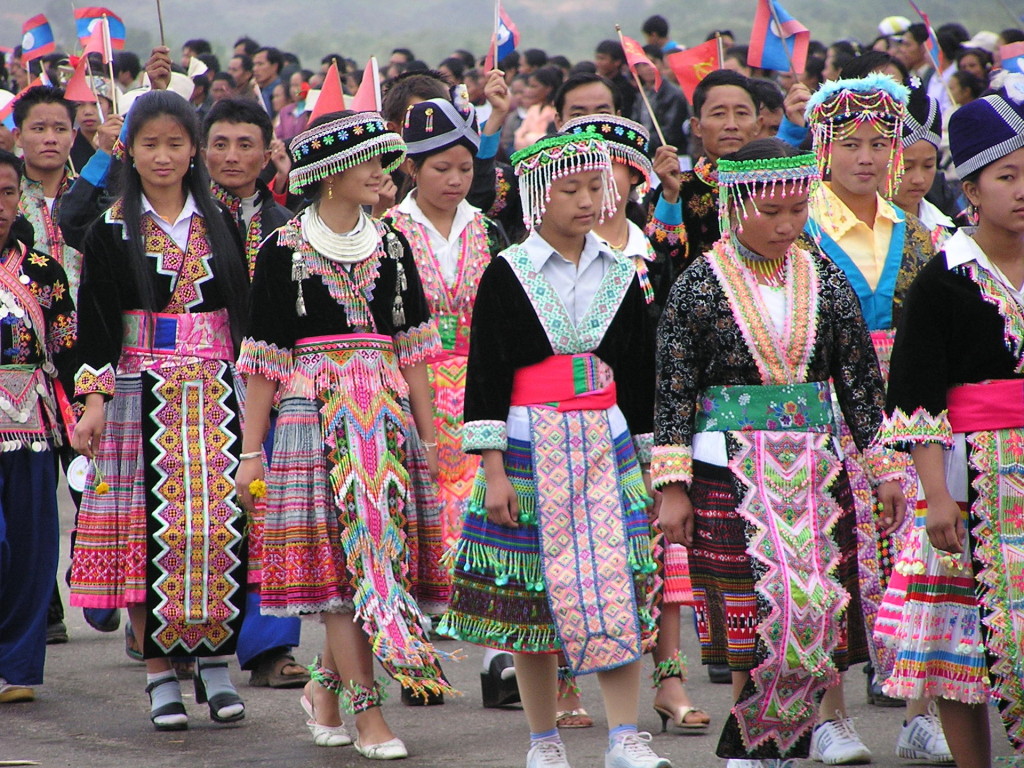 The Hmong were the largest group used by the United States CIA to fight in the Secret War. It is believed that over 60,000 Hmong were trained by the CIA and given weapons to ‘shoot the enemy’. Most of their duties during the war included disrupting communist supply lines and rescuing crashed pilots.

“They were better than anyone else around, every step they took was up or down so they    could move a lot faster than the enemy,” says Bill Lair, a legendary CIA agent who headed the agency’s paramilitary operations in Laos.

Like the Mien and Lahu, the Hmong began heavily migrating into Thailand after the fall of Saigon and the rise of the Communist Party in 1975. Today, there are an estimated 150,000 Hmong living in Thailand.

For the hill tribe people, Thailand has been a final destination from escaping a history of oppression. But, is Thailand really a place they can call home? Some have gained Thai citizenship, but most have not and are still treated as outsiders.

Sustainable development is imperative for a secure future. Being economically and developmentally stable gives villagers a better chance at becoming a part of Thai society. The more incorporated into modernization they are, the less persecution they are likely to face. The less persecution they face, the more likely it is they have found a place that they can truly, call home.